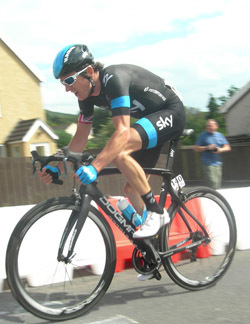 Last weekend saw the culmination of Abergavenny Festival of Cycling. And so the rolling countryside of this corner of Wales was inundated with cyclists, from enthusiastic families to ultra-keen mamils (‘middle aged men in lycra’) - you must have noticed the increase in these brightly-attired guys who drag themselves up the nearest hill every weekend.

The main attraction was the 2014 British Cycling National Road Championships, with the likes of Sir Bradley Wiggins, Mark Cavendish, Geraint Thomas (pictured above), Lizzie Armitstead and Laura Trott competing in a world-class field. 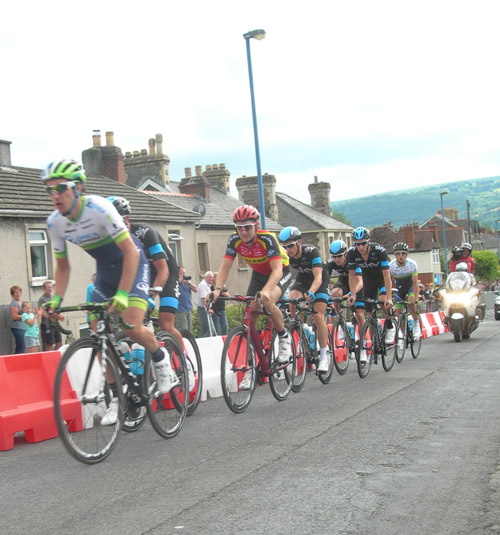 The day before the Championship races, the Sportive gave amateur riders of all ages and abilities the opportunity to ride the same course that the cycling elite would follow. The choice of routes ranged from the 20-mile long Bronze to the 100-mile long Gold which included a 4-mile 10% gradient climb up The Tumble (the road up our very own Blorenge mountain). It was superb to see the action up close, and particularly thrilling to watch the final stage of both the women’s and men’s races which took place through the streets of Abergavenny.

And we haven’t got long to wait for the next major cycling event: The Tour of Britain is coming to the county on September 9th. The third stage of the event will begin in Newtown and wind its way through the Black Mountains, into Abergavenny and finish at the summit of The Tumble.

Seems like everyone’s going bike-mad. Our friends at MidWalesMyWay are running a competition to win £250 of cycling accessories, and some enterprising locals have opened the Black Mountains Cycle Centre, which ‘rocks’ according to author and cyclist Rob Penn. Of course, there’s been a strong cycling fraternity in Abergavenny for decades. That’s where Double World Champion Becky James started out!

We’re very nearly tempted to get our bikes out of the garage and start our preparation for next year’s events. Then again, perhaps we’ll sign off now and watch the start of the Tour de France on television, followed by a gentle ride along the canal towpath. We don’t want to peak too early!