The all new boat Robin

Robin, the first battery powered canal boat in UK/Wales which won't require charging during their week's vacation. Energy for the boat is from lithium batteries, charged via solar panels at out boat house making the boat completely fossil free green cruising. Hot water for showering and washing up will be heated via a water source heat pump using the canal water as the heating medium. All the upper surfaces of the boat will be covered in solar panels. The boat will sleep 2, either in two single beds or one double. Steering uniquely for a canal boat, will be from a seated wheel position. The boats fit out will be of a equally luxury 5* standard to our other fleet of 20 boats.

How do you like the sound of a FREE HOUSEBOAT BREAK over the winter?
All you have to do is book two separate narrow boat holidays and travel all the way North on one trip and then all the way South on the other trip. Taking pictures along the way and tagging us on our social medias. Write a review and then the free houseboat break is yours! (subject to availability, terms and conditions apply please email or phone in office hours to enquire)

Hire a Skipper for your holiday

NEW for 2022 Your very own skipper offering as much (or as little) boating assistance as you'd like, to enhance your canal holiday. Need help with locks or mooring? Like an extra pair of hands on deck? Find out more >

Fleet of 20 narrowboats: all 5-star

20 highly-individual luxury canal boats sleeping from 2 to 8 people. Take a self-drive cruise through the Brecon Beacons National Park from March to October or choose a permanently-moored houseboat holiday from November to March.

Sir Gareth Edwards, one of the greatest rugby players ever, took a short break with his wife, Maureen, on our narrow boat Harrier in summer 2019. During their holiday, which was filmed for a BBC series, Gareth describes Beacon Park Boats as 'The Bentley of Barges'! Watch his video.taken from his BBC film on welsh canals

No experience is needed as our narrowboats are simple to handle. We'll send you an instructional DVD and there's a detailed handover before you set off on your cruise. The hardest task is choosing a boat! 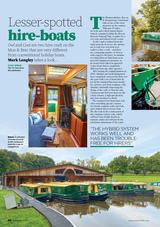 Waterways World has described our boats as "something special" and "very different from normal holiday boats."

Read all about it on our blog page

Considered to be Britain’s most picturesque waterway, the Monmouthshire and Brecon Canal (known locally as the Mon and Brec) is in rural Wales, yet close to road and rail links. Situated within the Brecon Beacons National Park and Blaenavon World Heritage Site, it's rich in heritage and wildlife, with endless things to see and do along the route. 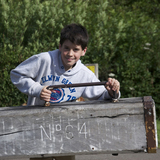 Taking your boat through the six locks on the Mon & Brec canal is exciting. Everyone on board can get involved, including children. If you’d rather a lock-free holiday the Mon & Brec is a perfect choice; you can spend a week cruising a 25-mile stretch without having to operate a single lock. Take a look at our suggested itineraries for short breaks and longer holidays.

Remember this holiday is not just about you; it's also perfect for your dog! We allow up to 2 dogs per boat without a charge and provide you with a dog towel for that unexpected swimming lesson. The path alongside the canal is in excellent condition making dog walking a pleasure.

This 3 minute video gives you a taste of our canal holidays on one of our luxury boats within the beautiful Brecon Beacons National Park.
Simply click on the photograph to the left.