From time to time, we invite people to contribute to our blog. On this occasion we'd like to thank Steve and Hazel, who came all the way from Canada to holiday on the Monmouthshire & Brecon Canal. Over to them...

You could hardly describe us as keen boaters when we are at home in Canada. We do not own a boat, and I (Hazel) have a fear of open water in a small craft. However, when it comes to boating in the UK, we are most definitely keen boaters. I have no fear of the canals in the UK; in fact, they give me a tranquil state of mind. We are repeat narrowboaters on British waterways, including the Grand Union Canal, which is entirely a different kettle of fish from the laid back Mon & Brec (as the locals call it). 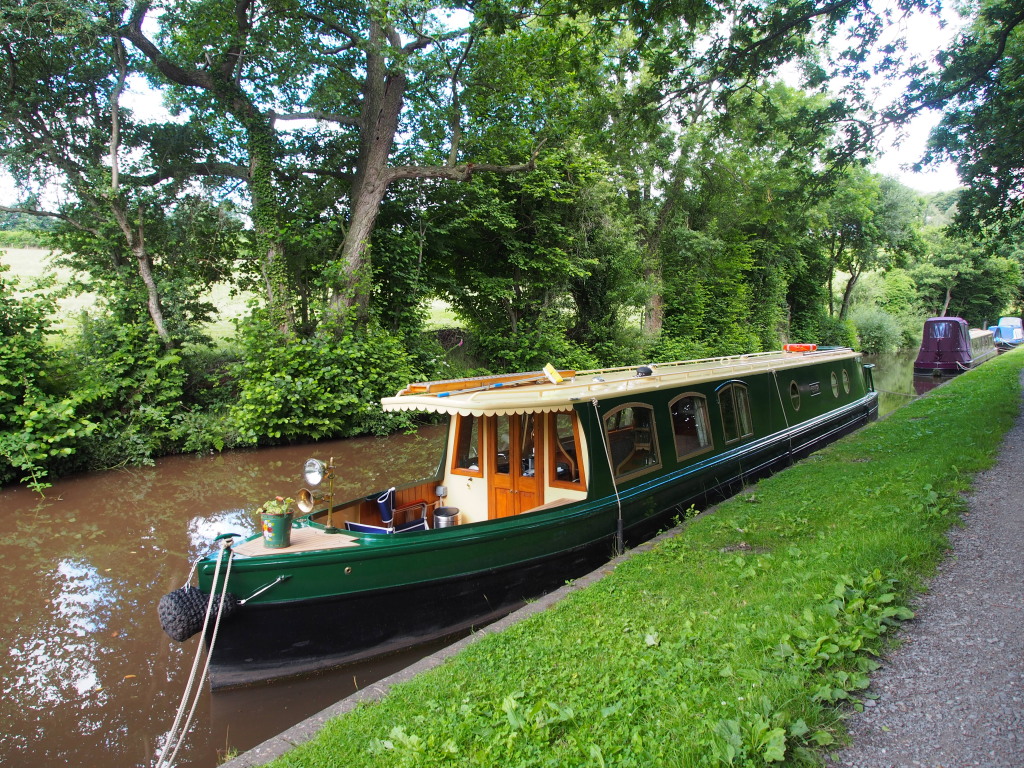 Photo: Harrier - our luxury accommodation on the Mon & Brec

Our interest in narrowboating stems from when we subscribed to "In Britain" magazine many years ago. We read with interest the articles about canals, and noticed in a few adverts that it was possible to hire narrowboats for a holiday. So we did just that. We also purchased a book called ‘The Canals of Britain: A Comprehensive Guide’ by Stuart Fisher. It’s a really useful book that features all the canals you could possibly navigate, and even some that are now obsolete. That’s where we came across the Mon & Brec, which sounded so delightful that we just had to visit. Incidentally, a tranquil photograph of Beacon Park Boats’ original wharf at Llanfoist, near Abergavenny, was featured in Stuart Fisher’s book. 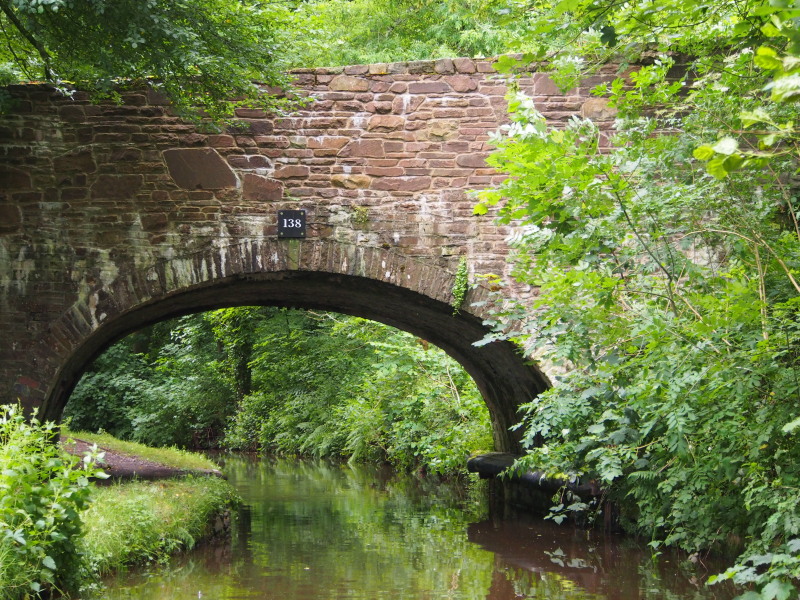 Photo: The Mon & Brec is fringed with trees and criss-crossed by historic bridges

Having already cruised the busier Grand Union Canal in England, we were keen to try something different this year. My love of history and scenery fuelled our desire to visit the Mon & Brec Canal in the Brecon Beacons in Wales. We chose to hire from Beacon Park Boats, having visited their website and watched their various YouTube videos. We found these two canals are entirely different holiday experiences, and to do one, makes one appreciate the other for different reasons. 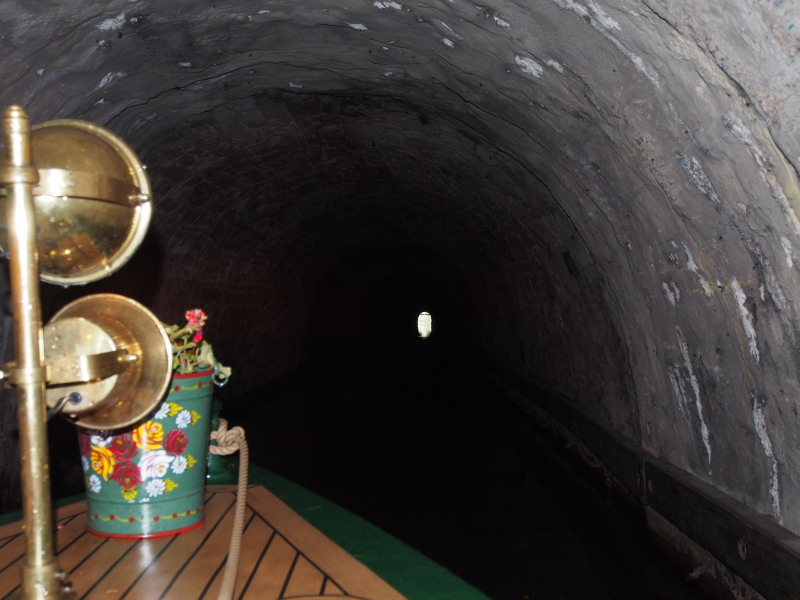 While there are plenty of towns, pubs and shops along the Grand Union, the rural setting of the Mon & Brec is equally charming. The countryside walks we took to visit some villages, pubs, and cafés afforded hidden gems, not seen easily right from the canal. 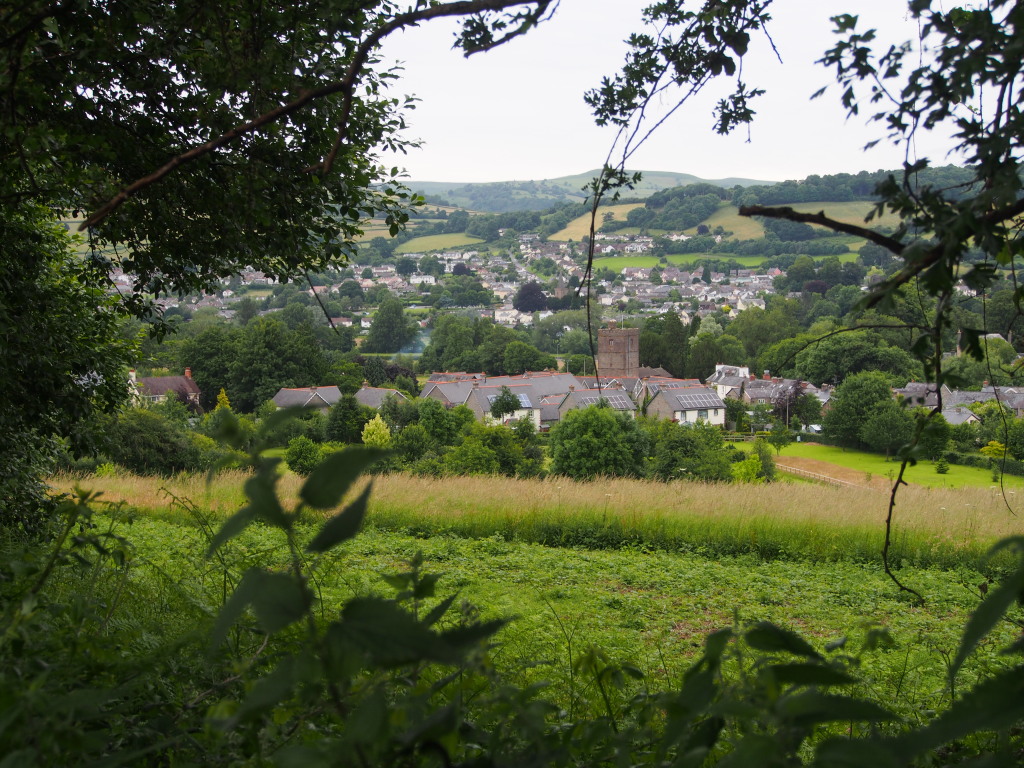 Photo: A view of Llangattock with Crickhowell in the distance

The stroll from Llangattock to Crickhowell was really special, past pretty gardens and St Catwg’s church. The ponies alongside the path were a charming surprise and the Brecon Beacons scenery is breathtaking. 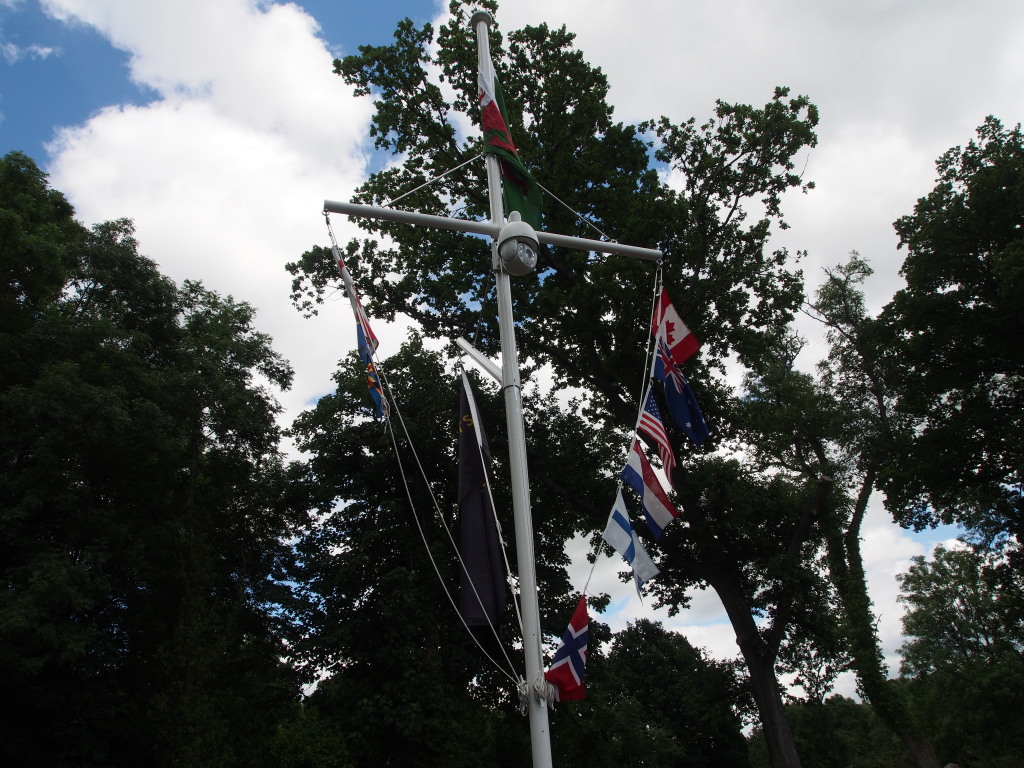 Photo: The Canadian flag flies at Beacon Park Boats' wharf to welcome us

The morning we arrived at Beacon Park Boats, we found the welcome we received from Alasdair and Sarah, after a long and tiring journey from Canada, to be so comforting. They truly treated us like we were the most important people they could welcome that day. 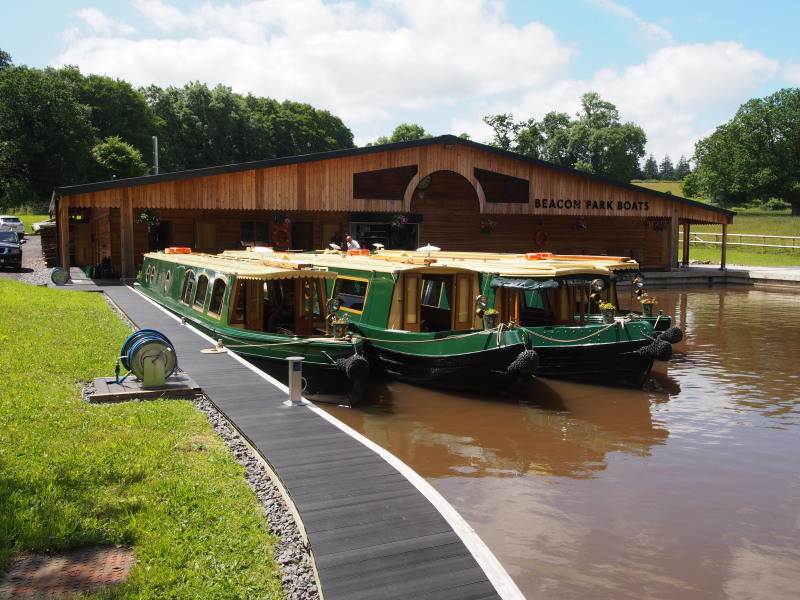 Photo: Getting ready to set out on our cruise

They were the same with everyone – giving individual attention and consideration to all their customers. That first impression is so important. Their interest in the wellbeing of all their customers, along with their obvious hard work, is the recipe for the success of their business. The handover of our boat, Harrier, and the trial cruise was smooth as silk. 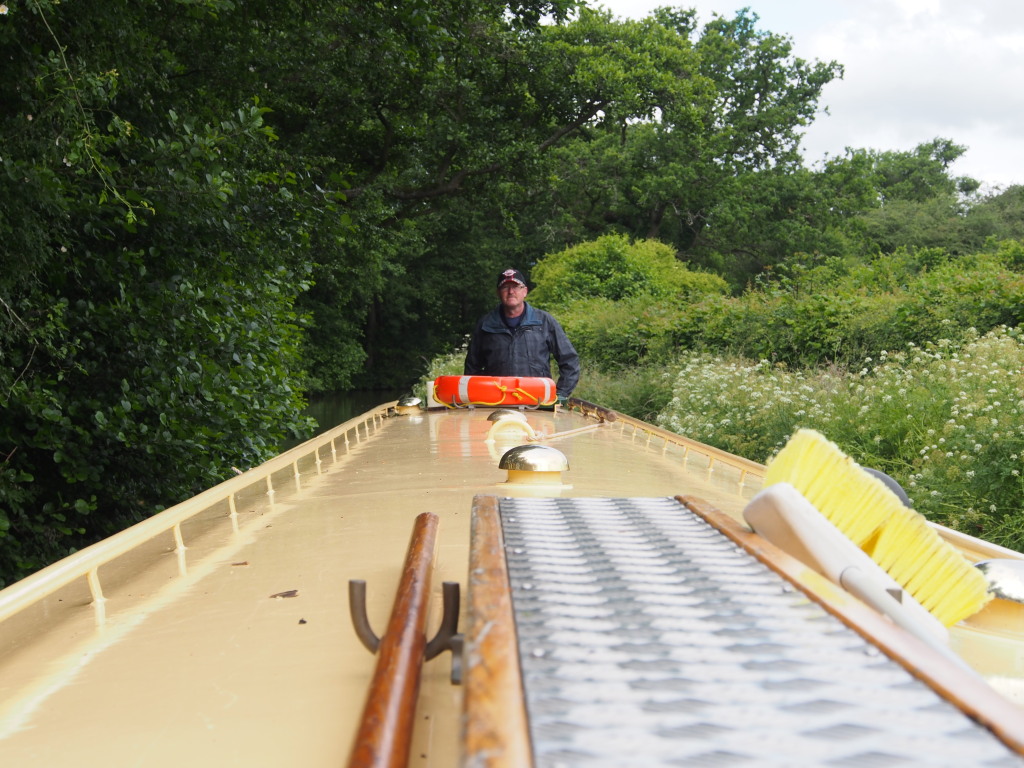 No matter where we went, we met friendly people. Locals and visitors using the towpath were very easy to talk to and enjoyed some banter with us. Sometimes we met husbands and wives on separate occasions, only recognizing the same dogs that were being walked, and instant recognition by “the other half” as having spent some time with their spouse the day before. While walking in Llangynidr we visited the café in the Walnut Tree village shop. Outside we spoke with a gentleman who recognised us in the Coach and Horses pub that night when the Wales v. Belgium Euro 2016 soccer game was on. He gestured to a big comfy leather sofa and said "Canadian seating is over here". You can imagine the excitement and laughter that night. On another evening a friend of ours, who owns a narrowboat elsewhere, drove over 250 miles in horrible rainy weather on his Goldwing motorcycle to spend an evening with us on Harrier. We originally met him and his wife on their boat in 2013.  Longstanding and enduring friendships and memories. 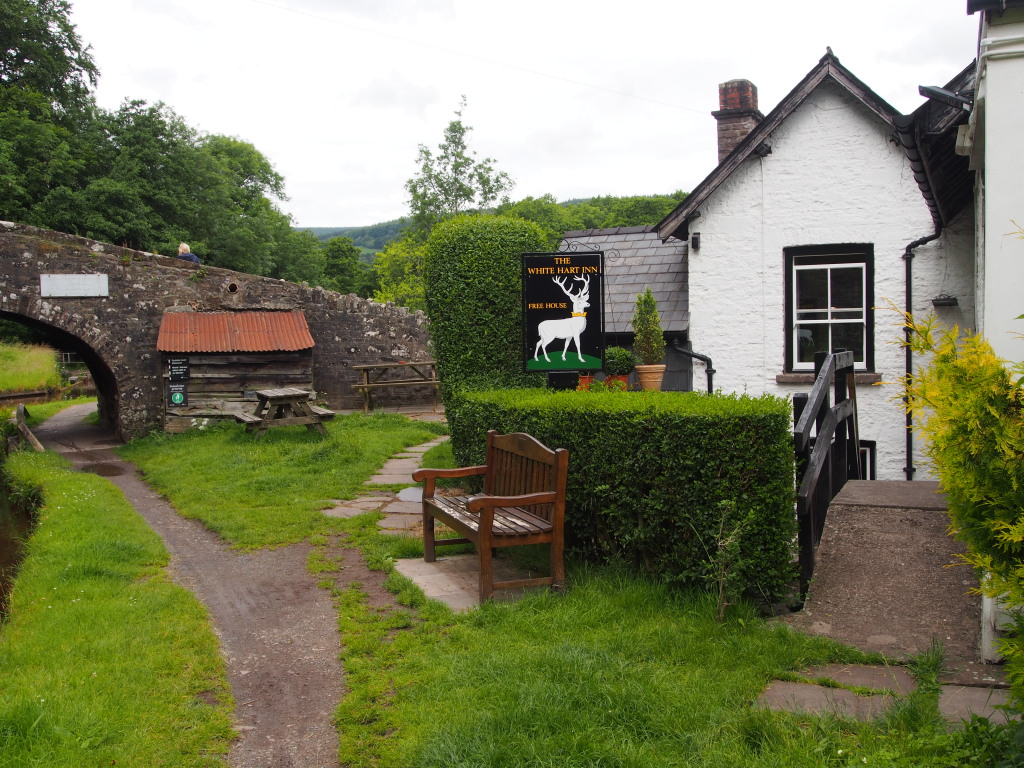 Photo: One of several canalside pubs in Talybont-on-Usk 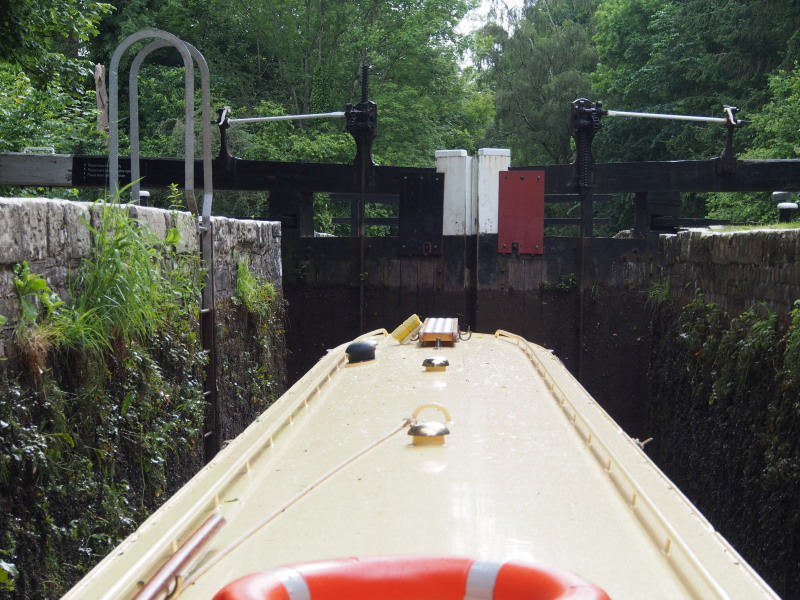 Photo: There are just six locks on the Mon & Brec Canal

Throughout our time on the Mon & Brec we tended to see the same boaters in various pubs and picnic places along the canal. We helped each other through the locks and quickly made friends with total strangers, exchanging names, laughter, life experiences. Some were locals who live near the Mon & Brec, others were visitors from all walks of life. Hopefully it won’t be long before we can plan another trip back to the beautiful Mon & Brec, and maybe catch up with these newly-made friends.