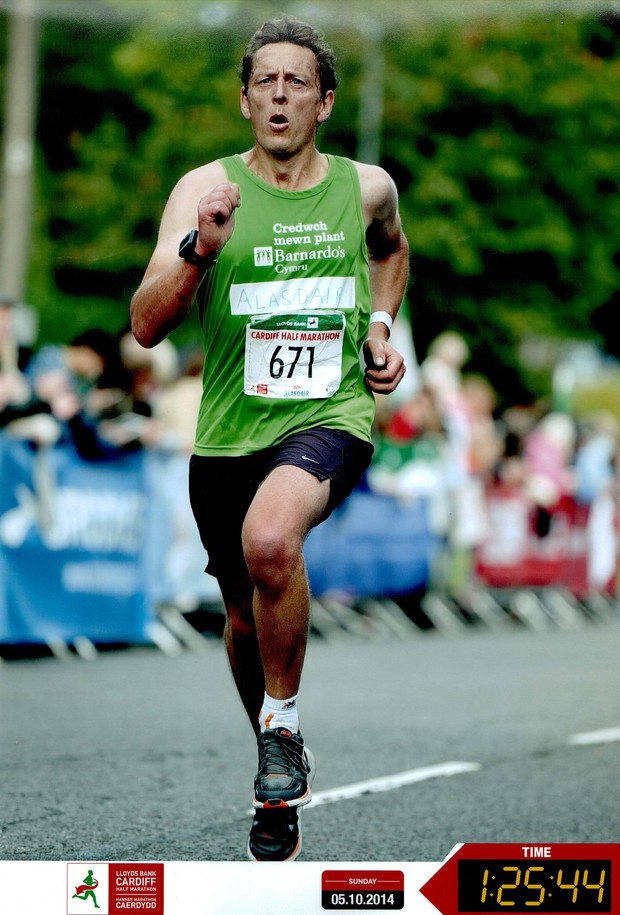 Alasdair crossing the finish line in the 2014 Cardiff Half Marathon with a PB of 1:25:44

A big 'thank you' to all who sponsored Alasdair in the recent Cardiff Half Marathon, raising almost £400 for one of his favourite charities, Barnardo's. Never one to shy away from a challenge, Alasdair was determined to achieve a personal best, and crossed the line in a magnificent time of 1 hour 25 minutes and 44 seconds, over 2 and a half minutes faster than his previous best time.

Over the past few years he's taken part in six half marathons: Bristol, Forest of Dean and Cardiff four times. Last year he ran Cardiff in 1:28:22 but found it really unenjoyable. He recalls: 'I set off far too fast, got sucked along by the pack, and at six miles was well ahead of what I had planned. From then on I struggled. It was the school-boy error of over-cooking the first few miles. This year I was determined to stick to my plan.'

Together with his running partner Richard, Alasdair ran a fairly steady first six miles and felt strong for the second half of the race. Then they picked up the pace and, remarkably, ran the last three miles at a 6-minute pace. They were over-the-moon and rather surprised to cross the line in just 1:25:44.

By running in aid of Barnardo’s, they were then spoilt with sandwiches, tea and cakes at Cardiff City Hall and, more importantly, a free massage from Cardiff University's Physiotherapy students... a trainee working on each leg!

Who knows, perhaps this year's great experience in Cardiff may lead to even more running. A full marathon, perhaps...?